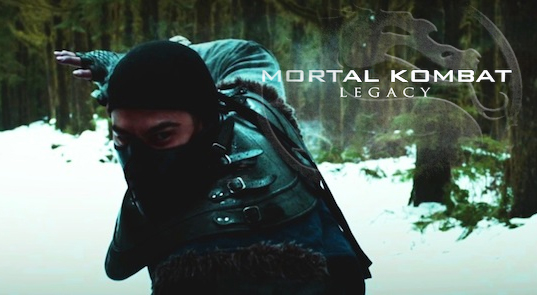 Today an anticipated title to a series that was previously on life support got the jump start that it needed to be taken seriously again. Mortal Kombat was more than a series of games it was a franchise of movies, TV shows and cartoon series. That all faded away and the games ended up going down the same toilet with everything else.

Last year a mysterious video was uploaded on Youtube (among the many) that caught the public’s attention. Nothing was announced from Warner Bros or NetherRealm but everyone linked and shared the short film called Mortal Kombat: Rebirth. Eight minutes of a dark, gritty, realistic take on the MK story. The video was viewed over 10 million times and Warner Bros admitted that they didn’t know about it. Because Kevin Tancharoen made it within 2 days. Tancharoen, LA director, made the short as a pitch to convince Warner Bros to make a movie out of it.

Here we are, a year later and Mortal Komabt: Rebirth turned into a 9-part web series called Mortal Kombat: Legacy. Still with the same grit and gore that it should be.

But episode 2 of Mortal Kombat: Legacy isn’t just out but the

game Mortal Kombat released as well. The gameplay improved greatly over the past, along with more creative fatalities, classic characters and stages, add in Kratos as an exclusive for PS3 gamers and MK now has the potential that it used to have in the past.

The Mortal Kombat franchise is back in the fight with a fatality up it’s sleeve.