The MMO scene is cluttered with several games covering either sci-fi or medieval fantasy, matter of fact, whenever an MMO is mentioned most likely those are the first two that will come to mind. Ergo, for Funcom’s The Secret World the setting will take place in modern times though it’ll still the have factor of fighting mythical creatures. But the setting isn’t the only unique selling point, the combat won’t have a class system at all therefore your character can have any power, weapon or item of clothing.

The story-driven plot involves three different underground factions fighting a secret war against each other and primarily dark fantasy creatures – along the lines of vampires, werewolves and zombies. The story will involve myths, history and urban legends across the globe and even across time in real locations. The three factions are Shanghai’s Dragon, New York’s The Illuminati and the London-based Templar. One feature is that each faction will show different sides to several missions. The game’s Senior Producer and Creative DirectorRagnar Tørnquist told Game Informer that the story is approached like “a huge jigsaw puzzle.” Each side has a different piece and together they will have to solve it.

Dragon: “The Art of Chaos” – Unknowable instigators of change, through quiet violence they create tiny ripples that grow into sweeping tsunamis.

Illuminati: “Sex, Drugs and Rockefeller” – Invisible puppet-masters and corporate manipulators, they crave power and wealth by any means necessary. 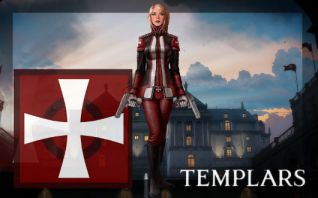 Templar: “Deliverance From Evil” – The old guard; suave and sophisticated, but fiercely brutal and uncompromising in their crusade against darkness.

Now about that other unique selling point  – the gameplay. There won’t be any levels or classes for gamers to choose instead it’s entirely skill based to give more of an opportunity to explore with the abilities, powers and weapons. Anyone can have anything to a large degree so the gamer will have freedom to play however they want to play. The powers, clothes and weapons are unlocked after completing quests given by the faction. You can signup for the beta at the website http://www.thesecretworld.com.

If everything goes according to plan then the game will release during April of this year.