A couple weeks ago, when the info on Assassin’s Creed 3 leaked I personally didn’t care for the game. I have the AC3 section up here because it has a large fan base and I know people will want to know more about it.  As for myself,  the setting and the characters aren’t blowing me away. I’m a huge history buff but when it comes down to western history it’s all about the ancient, medieval, and renaissance period. Thus, honestly, I’m not entirely going bonkers over Assassin’s Creed 3. My friend Nox, at Nox-Arcadia, was excited about it and he joked that the Templars might be dinosaurs, a good Turok reference. Then that’s when it hit me. This game will feature a Native American protagonist, he is mixed but still, he represents Native Americans in the gaming scene. 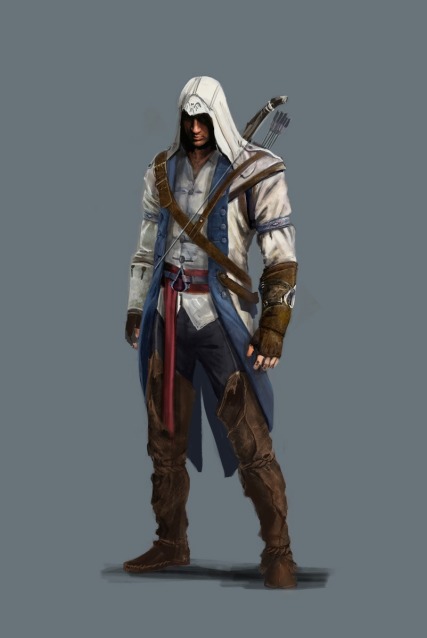 You never see a lot of Native Americans in videos games. I actually have a tendency to create one whenever I customize a character. From Mass Effect, Saint’s Row, Def Jam: Fight for New York. I’ve been doing it for years and they wouldn’t have feathers in their hair or wear a denim vest. I wanted my characters to breakout of the mold that is usually seen in games with a contemporary look and they would have nothing to do with a casino!

Which brings us this article. Stereotypes are in all forms of media especially video games. The gaming scene seems to be a little bit behind the times when it comes down to depicting Native Americans. That’s just me, I think so, if otherwise please let me know. This first article is a look at popular characters and controversies of the depiction of Native Americans.

October 13, 1982 one of the most, blatantly, racist and controversial games came out for the Atari 2600. Custer’s Revenge was possibly one of the worst games to ever be created. It has layers and layers of terrible on it. Players take control of General Custer who is wearing nothing but a bandana, hat, and boots. He is navigated from the left side of the screen to the right while trying to dodge a volley of arrows and once he past all that he reaches his goal: Sexually assault a nude Native American woman named Revenge. Several lawsuits and criticism sparked up against it resulting the game get pulled from store shelves. There are always WTF games but this one… damn… I couldn’t believe it when I first heard about it.

Women were still sexualized in games since Custer’s Revenge however not to that degree. Tala from Darkwatch is quite an interesting character to say the least. Tala is an self-reliant woman who has an ulterior motive throughout the game except she falls under the “sex object” banner. In the game, she seduces Jericho, the main protagonist, to become a vampire to continue those motives of hers and again we have the the white man giving it to the tribal women in a cutscene. Depicted as the femme fatale who can already hold her own in a fight Tala uses her sexuality as an edge at the same time making a sex symbol. My question is why is Tala the sex-bomb and not Cassidy Sharp? Cassidy is the other self-reliant, independent woman in the game?

Let’s change gears from the women and focus on the males. Let’s talk about the iconic ones in the fighting game genre (you know where this is going). In a tournament game all of the fighters hail from all of the world to fight each other. However, sometimes they depict stereotypes from other locations. Personally, I never cared for Thunderhawk, aka T. Hawk, in Super Street Fighter II. The four new characters didn’t seem enticing enough to own another Street Fighter game. I still enjoyed seeing the new World Warriors expect T. Hawk. Even looking beyond the stereotype he looked awkward to control, I thought he was a walking target like Zangief and he had an awkward stance with his arms out. Give me Fei Long, Super Street Fighter II’s Bruce Lee. Wataaaaah!

Anyway, I digress, T. Hawk is a member of the fictional Thunderfoot tribe from Monte Albán plains in Mexico. 30 years prior to the games story M. Bison stole his homeland and murdered his father Arroyo Hawk. That’s an original premise, have him fight The Man because he stole his land. Originally, his name was Geromino but they changed that because they thought that was going to be offensive.

Mortal Kombat followed suit in their third title with Nightwolf. I didn’t like him either because he was a spitting image of T. Hawk and as if he was the former’s younger cousin. Nightwolf and T. Hawk both sported arm bands, headbands, face paint and feathers. They also wore the same clothes, I used to joke around with my brother that these guys didn’t like wearing shirts, only denim vests and jeans. Nightwolf was an Apache Shaman who would manifest bow and arrows out of there along with a tomahawk. He can also transform into a wolf for his Animality.

Killer Instinct had Chief Thunder, who primarily fought with his two tomahawks. Thunder also had the ability to project a fiery Phoenix toward his opponents. His Mohawk of feathers would set fire as he jumped up toward his opponent. We can go on for days about Native Americans in fighting games. Although, Michelle Chang from Tekken is worth mentioning she’s a half-Native American half-Chinese woman who doesn’t use mythical powers except a powerful amulet, she isn’t a token fighter to the degree of T. Hawk or Chief Thunder.

Turok: The Dinosaur Hunter became the first, if not then one of the first, Native American protagonists in a hit video game. Based off of a Valiant comic of the same name. Turok was a title given to the eldest-males to protect the Earth and Lost Land from crossing. It first followed Tal’set who goes to the Lost World to fight the evil Campaigner from from crossing into Earth and taking over the universe. The Lost Land is a prehistoric world rampant with humanoids, humans, natural and genetically altered dinosaurs. Tal’set was a Native American warrior who fought with a knife and a technologically-enhanced bow but the buck stopped there. He also used machine guns, pulse rifles, a crazy gun that would shoot a spinning device that would aim and dig into an enemies head. It was in a setting where you wouldn’t expect a Native American warrior. The next Turok, Joshua Fireseed, featured mysticism and talismans that gave power. The third adventure featured Joshua’s siblings, Joseph Fireseed and his sister Danielle as they both fought together. The most recent in the series was published and developed from a different company and it took place in the near future. It featured Corporal Joseph Turok, who fought with a knife and bow alongside with various guns as he rebooted the franchise.

Even though, Turok was a main protagonist, the games didn’t explore the Turok’s backstory exploring more about the lineage or the first Turok, their culture, or delve deeper into the Turok’s personal stories; Tal’Set was around the American Revolution and Joshua is from the present day. Most likely, Acclaim wanted to keep Turok as the lone warrior and focusing on the problem at hand in the story rather than stepping back. Speaking of Native American protagonists let’s discuss Prey.

Cherokee Tommy Tawodi is introduced as a veteran who struts around in contemporary clothing (with a shirt by the way) who is trying to convince his girlfriend, Jenny, to leave the reservation while ignoring his grandfather and his Cherokee heritage. Shortly after a bar fight, Tommy, Jenny and his grandfather are abducted.  It has a very random sci-fi twist but the plot is solid. Tommy comes off as an actual realistic character and not a one dimensional single motive character. During Tommy’s adventure he develops from rejecting his Cherokee heritage to acknowledgement and acceptation with the help of his grandfather and Jenny. Though, he is given spirit arrows, gains the ability to spirit walk and so forth but it is used to add more depth to a complex character.

Native Americans came far in gaming especially with times changing. Tommy is a breakout character and it’s changing things up. In the Mortal Kombat reboot Nightwolf is given more character and depth than his appearance in the previous titles. With Assassin’s Creed III on the way putting a Native American in the spotlight we can hope for a positive depiction of the First People or mistakes repeated by several studios. Remember, Altair didn’t have an accent in Assassin’s Creed 1 but that’s for another article for another time.

David Bowen © Copyright, Blister Gaming, 2010-2017 Unauthorized use and/or duplication of this material without express and written permission from this blog’s author and/or owner is strictly prohibited. Excerpts and links may be used, provided that full and clear credit is given to Blister Gaming with appropriate and specific direction to the original content.